A respite from the many coronavirus messages you’ll read today…

My Uncle Andy was one of those larger than life characters. Everyone knew him. And as far as I could tell, pretty much everyone loved him.

I had great experiences with him while he was living. Yet, there’s something I learned from him after he died that I lean on most often.

He was tall and talkative and funny.
Andy, my mom’s big brother, was already in his 40s when I was born.  And he seemed to be a hero of the family, a great human who I could never live up to, always doing something for someone else.

He wasn’t perfect.
He told the worst jokes humanly possibly. In our family, if a joke made you groan instead of laugh, we called it “an Uncle Andy joke.”

Uncle Andy died when I was in my 40s.
I traveled from Ohio to his funeral in Iowa. Since I arrived about an hour early, the church was empty. I walked around the neighborhood on that cold and cloudy day and began reflecting on the huge positive impact he’d had on so many people in his lifetime.

Perhaps it was the cocktail of grief and my own life struggles of the moment that caused me to start comparing my life to his. Soon, it was as cloudy on the inside for me as it was outside. I was muttering to myself about my wasted life, focusing on my failed and half-hearted attempts to do good in the world. 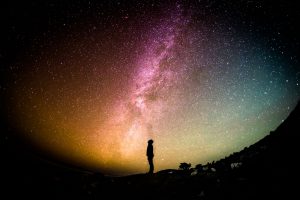 Then (I swear!) I heard Uncle Andy’s voice in my head. The message I heard was clear. The moment I heard it, I halted abruptly and I stood up straight.

I smiled as I stood still on the sidewalk.
Uncle Andy had one last quip to deliver, and this one didn’t make me groan.

The message: Let history be your teacher, not your anchor.

Immediately, everything I’d been thinking about took on a new color.
Really? There was a different way to view my shortfalls?

I’d never thought of that idea before. I need to remind myself of that sentence, regularly.

Tell me you don’t have a few unsavory things from your past that resurface in your memory occasionally? Things you wish you could just bury and forget about; things you hope other people never learn about.

The reason you cringe is that now you know better.  You’re wiser and stronger and clearer because of those moments in your life.

You can allow those to be anchors that you drag through life, letting them slow you down and diminish you. I know all about that approach, myself.

Or, you can let them be your teacher: make amends, fix what you can, apologize, get stronger and wiser, repay the debts, do it over. Remind yourself of how what you learned has made you better, today. And make your plans to do it a new way. You don’t have to let them weigh you down any longer than you choose to.

“Let history be your teacher, not your anchor” is a mantra that’s carried me through some devastating failures since Uncle Andy’s funeral. It sometimes takes me longer than I’d like to remember his guidance. But when I do, I become a better human for myself and for the people around me.

In work, in life, with your family, friends, and neighbors, you’re carrying some unnecessary weight.  What will it take to make history—even your worst history—your teacher and release the anchor it’s been for you?

It starts with a choice. Can you imagine doing that?

Feel free to grab this mantra for yourself if it helps. The world needs the best of you right now, not the weighted-down version.