Do you have the guts to expose yourself like she does? It gets rewarded.

Are you owning your stage?
On Monday night, we saw a fantastic cabaret show. The star was Jane Lynch. But truthfully, we were mostly there to see my wife Brenda’s long-time friend, Kate Flannery, who was also in the show. You might know Kate as “Meredith” from The Office. (Yes, she’s as fun in person as on TV.)

One element from this show stage translates 100% to your leadership stage. If you can pull this off, you’ll never lack a loyal following.

Pros know their job and play their part. 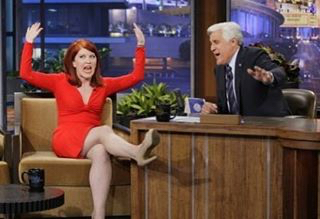 Kate’s played many roles in her 30+ years in show biz. In this show, she was singing with and providing on-stage hilarity for her friend Jane, along with a great crooner, Tim Davis. They were backed up by the super hot Tony Guerrero Quintet. Real pros playing their parts.

Jane’s gift is dead-pan and steady humor, so Kate’s role in this show is to be quick and over-the-top outrageous. Kate delivered perfect harmonies while throwing her body around the stage getting people to laugh so hard they cried — even during sad folk songs. It made Jane even more entertaining.

Katie got the entire audience to engage, clapping, or waving their arms at inappropriate times. If they didn’t, she called them out in a fun way until they joined in. Even the band musically zigged instead of zagging to keep the audience alive.

We never knew what was going to happen so we had to pay attention.

These eight pros know a stage secret:
We are craving someone who will dare to fail right in front of us.

Fully exposed is fully rewarded.
We’re drawn to someone who will take the risk and perform without a net. We don’t feel nearly as connected to the neatly scripted and expertly edited performance.

So much is staged and scripted in the world that we bond with that person risking it with us.

Your audience wants you to give them two things — this applies for leaders, not just performers.

Unskilled “winging it” doesn’t work.
Monday night’s show wasn’t just a bunch of hacks cutting up on stage. All eight performers honed their skills for years. Plus, they rehearsed this show tirelessly before they hit the road.

On that foundation, they could cut loose live on stage and invite the audience to be a part of the show.

You can do the same: Train and rehearse. Then, be real.

How much are you willing to risk for loyalty and engagement?

The opportunity to co-create with you gets people to invest unreasonably.
We drove two hours each way to catch this show and didn’t get to bed until 2:30am the next morning. I’d do it again next week if I could.

The people you’re wanting to inspire feel the same way.
Are you inviting them to join you in a live performance or to observe your squeaky-clean delivery of the company line?

If you’re asking me to bring my all, show me you’re all in.

Please share with me below, when is the next time you’re going to risk going all in to engage your best people?