When my cab became a classroom in leadership

Teachers appear when you need them. Rarely do they take on the form you were expecting.

My cab driver to BWI airport turned out to be a Yoda with dreadlocks. His name is Naod.

I was strangely sad we didn’t hit more traffic because the ride and the conversation ended too quickly. 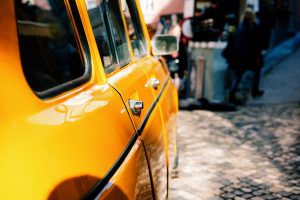 From the back seat, I could only see his eyes in the rearview mirror and his long dreadlocks. I detected a slight accent in his speech.

So I asked, “Where are you from, originally?”
“I’m from Ethiopia.”
“Cool.  How long have you been here?”
“12 years.”
“Did you speak English before you came to the US?
“No, I taught myself when I arrived.”
“No way!  You have almost no accent and your English is impeccable. How’d you do that?”
Naod replied, “To learn something, don’t be shy. Today, you make a mistake. Tomorrow, you do better.”

Bam! With just 15 words, he dispensed a pearl of wisdom bigger than the Hope Diamond.

I grabbed my phone and wrote it down before I lost it. He gave me permission to share it.

Naod kicked open a conversation that anyone with a burning desire to change the world needs to consider.

What’s the most audacious, valuable thing you want to accomplish, to contribute?
If it’s really audacious, you are far from achieving it now. That’s why it’s audacious.

At this moment, there are many, many, many things you don’t know how to do in order to make your audacious contribution.

You have so much to learn.
So did Naod when he arrived in the US. Learning a new language was just a part of his challenge, no doubt.

In two short sentences, he illuminated how the most successful among us bridge that wide and treacherous gap between dreaming big and delivering big:

The people who make the greatest contributions are the greatest learners. Period.
For example, did you know Elon Musk knew nothing about rocket propulsion in 2001? He’d been working in financial services (PayPal) before that. He founded SpaceX in 2002. You know the rest.

Let me repeat. HE KNEW NOTHING. Then, he taught himself. If you haven’t noticed, he’s been changing the world, surpassing the most established companies in every field his businesses have entered. He learns better.

Madonna couldn’t play an instrument or sing when she moved to New York as a college dropout. She got to learning and after a little time and a lot of ridicule, she became the most successful artist of her era. Artists today still admit to copying her style.

The gap between you and your audacious goals is simple: Knowledge.
The vehicle that will get you there is equally simple: learning.

But, will you ride a rocket of learning like Naod, Elon Musk, and Madonna?  Or, is your learning more like driving slow-and-safe in a minivan in the right-hand lane?

Learning at rocket speed is risky.
You could crash.  Actually, you WILL crash. Repeatedly.

The biggest enemy of learning is not IQ. It’s not the quality of the teacher.
It’s the unwillingness of the student to be a complete know-nothing-failure, over and over and over.

It’s avoiding the discomfort of your absolute ignorance, being unwilling to keep going with curiosity in spite of it.

It’s the need to look good instead of looking stupid. Or as Green Beret (retired) Lt Col Scott Mann says it:  Cool is the enemy of great.

Thomas Edison, one of the greatest inventors of all time, WANTED to fail.  He viewed every failure as one step closer to success. When asked about his many failed attempts to invent the lightbulb, he famously replied, “I have not failed. I’ve just found ten thousand ways that won’t work.

Where and how do you want to contribute above all else?
If you really want it, strap on your rocket boosters and prepare to crash.