Ever had your heart broken? This dude turned heartbreak into gold.

I had lunch last weekend with Jeff, my best friend from high school.

Today, Jeff’s an über successful insurance agent. I see his face plastered on a giant roadside billboard ad every time I drive home to visit my parents, and it always makes me smile.

But Jeff wasn’t always at the top.
I don’t know how we landed on the topic, but over fish tacos we talked about some of our heartbreaking defeats in life. You’ve had a few, right? 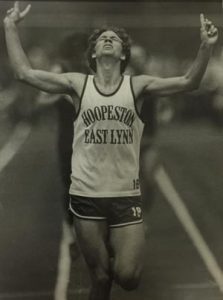 His sophomore year, Jeff’s 2-mile relay team took 1st at the Illinois State Track Meet. It was an epic come-from-behind victory, still one of the most exciting sporting events I’ve witnessed—and a really big deal in our little home town.

As a junior, Jeff “The State Champion,” returned with a swagger to the State Track Meet with the fastest qualifying time in the state in the half-mile run. He called his dad the night before and said, “I’m gonna win this.”

But he didn’t. In fact, he finished 12th out of 12 runners in the finals in a stadium full of fans.

Heartbreak of teenage proportions.
Jeff was embarrassed and unhappy in only a way that a teenager can be. Crushed. Devastated.

Cooler heads told him to just be happy he’d made it to State.

But, Jeff wasn’t happy. Though he was smart…because he let his teenage heartbreak fuel a turnaround, rethinking everything and rewriting his approach.

One year later, Jeff won the State Track Meet in the 2-mile run and took 5th in the 1-mile. Earlier in the fall, he also placed 2nd in the State Cross Country meet. His times are still among the best in Illinois history.

Jeff admits that none of this would have happened without his heartbreak the year before.

Show me a meaningful accomplishment you fought hard to achieve, and I can show you a heart-breaking failure that preceded it.

Good news! Heartbreak signals a loss of all hope.
When you feel heartbroken, it’s because you know it’s over without question. It’s a total loss. No repair is possible. You surrender…at least, for now.

When you’re completely devastated, you’re willing to question your deepest assumptions, beliefs, motives, and goals. What a great opening!

Heartbreak is the true breakfast of champions.
If you really want to revolutionize your world, heartbreaks will be a part of your diet.

What’s breaking your heart, right now?
Did someone betray you? Did your new business fall apart? Did you get your ass kicked in public?

Do not squander this heartbreak! Who knows when the next opportunity to paint a whole new, powerful worldview and action plan may come?

Epilogue: In 2015, Jeff’s agency finished 5th in the company standings in Illinois. On the drive home from the awards banquet, he told his wife, “We can do better.”

Wanna place a bet about how things will end in 2016?

Comment below about your biggest heartbreaks and the turnaround they fueled.

Do you want to place a bet on your own success? The Mind to Win online program is kicking off on May 17 for twenty people who are ready to run like the wind even after a heartbreak. Information to come. Or tell us you’re interested, here.