My friend built a secret weapon to save the world. You could, too.

I know a man who’s foolish enough to believe that maybe he could save the world. Or at least his corner of it. After watching him work, I believe he’s not so foolish, after all.

Rex Mann is a retired forester who spent 42 years working for the National Forest Service. He’s been haunted by a tragedy for most of his adult life: the extinction of the American Chestnut tree.

What about you? Are you aware of something that isn’t working…that you believe you could address? If so, you’re going to need the same secret weapon Rex built to save the forests. 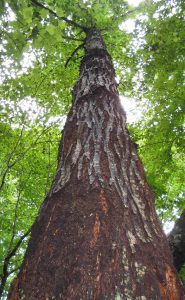 Stepping up wasn’t the easy choice.
Letting someone else deal with it would be easier for you and for Rex. Because you know that stepping up is going to bring an onslaught of challenges and headaches—and extra work.

Not only that. Your chances of succeeding are probably low, and it’ll get so difficult, you’ll want to quit. Plus, people who don’t understand you may even question your motives and attack your character. If you’re working for a greater cause, those risks are predictable.

Rex thought through all of those risks and reluctantly decided to act anyway. That’s when he started to develop his secret weapon.

What’s the secret weapon?
Story: a really compelling story about the challenge and what you’re doing to overcome it. A well-built story can inspire action in ways that defy logic. Well-told stories are at the core of every powerful movement. Full stop.

Used wisely, story will transform Rex (and you) from an underdog with a dream to a challenger with a fighting chance.

Think that’s too simple an explanation?
Imagine someone asked why you are taking on your biggest challenges? You’ll answer with a story. The story may have data embedded in it, but if you’re feeling engaged in that work, the data will be wrapped in a story. Human brains are wired for story.

The bigger the stretch, the more you need a story.
Rex believes that restoring the American Chestnut tree to the forest could be a first step in restoring many species, extinct or near extinction. It doesn’t just threaten the forest. It threatens humans in ways we don’t fully understand.

Dedicated scientists have been working for decades to restore the American Chestnut tree. Check out these great people: ACF.org. But scientific data alone has never persuaded anyone to jump into action. It’s the compelling stories people tell about the data that will inspire people to act, and that’s what Rex worked to build.

You might have an idea that will save the world.
But without a compelling story to bring it to life in the hearts of people who can lift your idea higher, you have a car without wheels.

Rex generously told his story to help restore the American Chestnut at a recent TEDx event, and I think you’re going to want to watch it. It’ll be the fastest 12 minutes you’ve lived in a while.

When you watch Rex speak, don’t be fooled by how easy it makes it all look. He wrote and rewrote this story for over a year and rehearsed it well over 250 times.

That’s because he’s trying to change the world, and he wanted to be ready. Great stories don’t just magically appear. We build them.

What’s the story you’re building that will change the world?

STORIES REALLY CAN CHANGE THE WORLD! I share 44 very short stories to inspire the best in you in my new book: Free the Genius, How the Very Best Grow Their Meaning, Mission, and Contribution.

These stories help you access the very best in yourself in those challenging moments when you need to be reminded of what you’re capable of.

Will you help me?
On March 21, you can buy Free the Genius in Kindle for 99 cents. And if you buy it that day, you’ll help me lift the book’s ranking at Amazon in my effort to make it a #1 best-seller.

Book bonus: Free the Genius will give you access to training videos (my gift to readers) that also go “live” on March 21. The videos go deeper on the key book themes to help you do your biggest work.