This virtuoso gave a better answer than my question warranted. So worth it!

I had the chance to have a brief conversation with celebrated, Pulitzer Prize-winning author, Ron Chernow, recently.

While we spoke, he made a comment that rang a bell in my head that will no doubt be valuable for you, too, if you intend to make a meaningful impact in your world.

He’s a true virtuoso.
Chernow is best known for writing the book, Hamilton but every book he writes is an award winner. Chernow’s biography, Hamilton, inspired Lin Manuel-Miranda to write the earth-shaking musical of the same title. 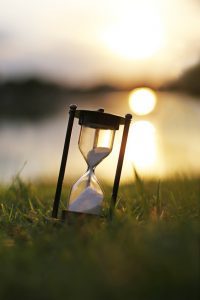 He has a reputation for painstaking research to help him tell the story of influential, complicated people who’ve made a great impact in the world. His biographies seem to dispel myths and to inject more truth and humanity into their stories.

At a recent book signing event, Brenda and I were the last people in the line to get our books signed. With no one waiting behind us, he was able to spend a few minutes chatting with us.

I wondered what his writing experience was like.
Because it’s taking me a long time to read his books, I asked him, “How many hours does it take you to complete a biography?” I expected him to give me a number in the thousands.

He seemed surprised by the question.
He cocked his head thoughtfully and said. “Hours? Wow, I don’t think of it in hours. It’s more like YEARS.”

Bam! And that’s why he’s a master.
How often do you set a goal that will take you years to achieve?

For most of us in this fast-paced world, goals are measured in weeks or quarters, maybe a year. Other than raising your kids well, how many goals have you set that you’re willing to devote years to?

In most parts of our modern world, people would think you were odd if you talked about a goal that will take you five or ten years to achieve.

Fast is not bad. It’s just not all there is.
The “show me the money, NOW!” mindset that drives much of our fast-paced world will definitely produce some great things, quickly. Yet, it limits us from taking on some longer-term endeavors that may have a greater impact on the world—and have more meaning to you.

He’s leveraging the Mastery Mindset.
Chernow is going counter-culture with his Mastery Mindset, which often measures success in years or even decades.

He’s willing to bite off a huge goal knowing that he’ll have nothing to show for it in a week or in a year. And still, he comes back to the mostly solitary work with enthusiasm, week after week, book after book.

Sometimes, it’s not about you.
When you pick a goal so far away, others may actually receive more for your efforts than you will.

The outliers.
Who are the people you respect for their contributions to the world? It’s likely they’re thinking in terms of years or decades for their goals, too. They’re not normal.

For example…
A retired forester I’m lucky to know, Rex Mann, has a goal to restore the American Chestnut tree, which was wiped out to extinction by blight in the 20th century. The four billion thriving American Chestnut trees that once dominated the eastern half of the US was a critical puzzle piece of the ecosystem. Restoring it would be a positive game changer.

However, Rex doesn’t expect to see the tree restored in his lifetime. He hopes his grandkids will enjoy it. Still, he toils away for hours a day on behalf of this goal he’ll never experience himself.

Ordinary people with a long-term view can do extraordinary things.
Neil Armstrong was the first human to walk on the moon at age 38. His sacrifices to achieve that feat benefited and inspired billions of people he never met. He grew up as an ordinary kid in small Ohio towns. But he pursued his dream for decades. He got his pilot’s license at 16 and kept pushing frontiers in flight years even after his historic moon walk.

Embracing the Mastery Mindset is counter-cultural.
Everywhere you turn—at work, on TV or the internet, in your neighborhood, you’re surrounded by a culture that prizes speed, novelty, and quick gratification.

Yet, some of the most valuable goals take time. Years. And years. Or even decades.

It’s not that the goal is to take a long time to achieve your objectives. It’s just that taking on the Mastery Mindset means you’re WILLING to dedicate yourself to a long run to get there.

What about you? What are you willing to devote years to building?
To deliver on what your generous heart wants to create, you’ll need a Mastery Mindset. You’ll find yourself alone on the long journey, often. Also, along the way, you’ll find compatriots—other outliers—on their own multi-year mastery path.

So, what about you?
What are the most meaningful contributions you wish to make?  How long are you willing to work at it?

Preview: I’ve written a new book.
In January, I’ll be publishing a book written for people on a mission to make their most meaningful contributions at work and in life. Ordinary people with extraordinary work to do. It will not be as thick as Chernow’s books, but it does distill over two decades of work into one place. More information will follow, but I’m excited to share the news, here.